Have you ever picked up a gallon of Edy’s Double Fudge Brownie ice cream at the grocery store? Chocolate ice cream, loaded with brownie bits, and a fudge swirl to boot! It was my favorite flavor as a kid, and I wasn’t even that into chocolate growing up, so you know this stuff had to be good. Of course, after a few summers scooping at an ice cream shop and a few years experimenting with my ice cream maker, I’ve become quite the snob and generally turn up my nose at store-bought brands. (I know, I know—I’m the worst.)

Even though I usually crave a couple of scoops from my favorite local shop (where the flavors are unique and everything is made in-house), this week I had a major case of chocolate-munchies that required immediate attention. And with half a quart of heavy cream in the fridge, the result: my own adult take on my childhood fave.

As with any craving, the most important thing was getting my fix ASAP. So while Double Fudge Brownie has that fudge swirl, I didn’t have fudge sauce or the ingredients to make it right then, which meant this component got the ax.

To make up for this missing chocolate element, I decided to add some espresso powder into the ice cream mixture to enhance the richness of the chocolate flavor. But coffee and chocolate is one of my favorite flavor combos, so I added even more espresso to the mix so you could actually taste it in the finished product. Not to brag, but this was a seriously good decision. 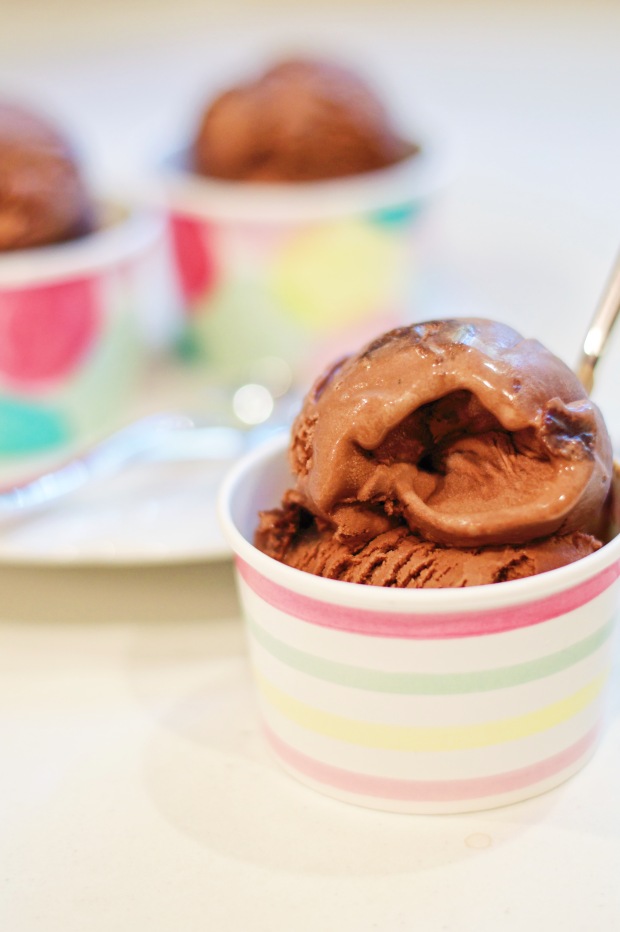 For the ice cream:

Bake a batch of brownies, and let them cool completely. You could make them from scratch, but I used a boxed mix. The brownie bits definitely add flavor and texture, but the main event here is the ice cream, so boxed mix brownies (or even store-bought) are just fine. (Major bonus: You’ll only use about 1/3 to 1/2 of the batch of brownies in the ice cream, so you’ll have plenty of leftovers to snack on.) Cut the brownies into 1-inch chunks, so you have roughly 1 1/2 cups, then place the chunks in the freezer. This keeps the brownies from falling apart when you add them to the ice cream later!

Next, sift the cocoa and espresso powder into a medium bowl. Add the sugar and salt, and whisk until combined. Pour in the milk, and whisk until the dry ingredients have dissolved. Stir in the heavy cream and vanilla. Cover the bowl and chill in the fridge for at least an hour or overnight.

Once the mixture is chilled, churn it in an ice cream maker for about 20 minutes, or until it reaches a soft, creamy texture (kind of like soft-serve). Spoon a third of the ice cream into a container, then sprinkle in some of the brownie bits and press them into the ice cream with a rubber spatula. Repeat until all the brownie chunks have been incorporated. Then, cover the ice cream and place it in the freezer until you are ready to serve. (Pro tip: Don’t forget to snag a few spoonfuls straight from the ice cream maker first.)

Nothing beats the creaminess of homemade ice cream. NOTHING. But the hint of espresso in this recipe makes it even more decadent. And the brownie bits just put it over the edge. I will definitely be making this again!

Even though this ice cream tasted super delicious (I’m glad I brought it to a friend’s house or I would’ve eaten half the container in one sitting), it’s not exactly the prettiest. Brown on brown is never a good color palette, even when it comes to dessert. But thanks to these adorable treat cups, my boring brown ice cream looked almost as good as it tasted. (More cute paper ice cream cups here and here!)

Happy baking! (Or, you know, churning in this case.)